The Road That Should Be Less Traveled 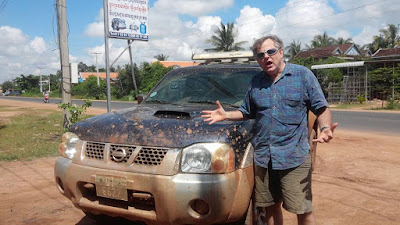 Judy arrived with the Calvin Presbyterian gang last Thursday at noon……but Eva Air misplaced their luggage and it failed to arrive. The 5 had to spend 3 days in the same clothes, which was not unusual for people from the PNW, and each had the stains to prove it, stains that proudly represented every meal and beverage consumed over those 3 days. One fellow needed his meds as well, and the group had time-bound commitments in Kompong Thom with our ONYX students, Scholarship English Students, and local churches. Then they were scheduled to travel on to Siem Reap to see Angkor Wat, so they left first thing Friday morning for Kompong Thom with only what they wore on their sweaty backs. EVA Air said the bags would be coming in on flights from Bangkok at 3 p.m. and 7 p.m. that Friday afternoon. Vysal and I commandeered Seila’s blue Toyota Pick up (forgetting to ask if he needed it) and went to the airport to fetch the luggage at 3 p.m that afternoon. A few bags came in at 3 p.m., but 4 were still unaccounted for. Vysal and I drove out of the airport and chilled at a nearby restaurant that had nasty coffee, (typical Cambodian coffee served at Khmer Coffee Shops are a mixture of burned soybeans, burned corn, and real coffee) until 7 p.m., and rifled through the ‘suspect’ luggage on the conveyor as rotated. It was quite the ordeal trying to find any labeled names as EVA baggage staff had tightly wound the stickers with names of the bags owners many times around the handle. It was just impossible to snatch them off the conveyor like we planned, so we had to wait until airport staff collected them. Then we began the process of peeling back layer after layer of sticker to get to the names. After all that, one bag still hadn’t arrived but luckily it was a bag they could manage to do without for a few days and Vysal and I left, in the rain and dark, at 8 p.m. We figured we had about a 3 1/2 hour drive until we hit a 40 kilometer-section of road that was just a muddy washboard. We often had to stop to wipe the mud off of our headlights to see. Many times, Vysal almost came to a full stop after being seriously blinded by container trucks with airplane strength headlights. As we pulled into the hotel parking lot 1:20 a.m., with 6 of the 7 pieces of luggage in tow, Seila’s truck abruptly gave up the ghost and died.

We were up at 6:30 a.m. trying to diagnose the problem. Judy’s van driver and I suspected the generator, as during the last mile of travel, the windows would not go up or down, and speedometer stopped working. After breakfast with the Calvin gang, we snagged some local talent to push and jump-start the truck. It fired up, and since Vysal wanted to get it back to Phnom Penh before dark, we left the city of Kompong Thom at 10 a.m. About 30 kilometers down the road, the electrical system began go totally haywire and the brakes and the power steering froze up. As we rolled noiselessly along, the road, Vysal struggled with steering wheel to get off to the side of the road. We landed only a few hundred meters from a very good mechanic. He began his diagnosis at 10 am, decided it was the generator, and he left for a long while to find one. The first one was a dud, and second one did the trick, but it was 6 pm by then and the mechanic wanted a break. Vysal was a few shades darker, and I was a few lbs. lighter after waiting 8 hours in the heat. Luckily, there was a run down guesthouse nearby, and Vysal and I rented a room there. The one perk was a wedding ceremony next door with an elderly monk chanting through a blown speaker at maxed out decibels. But, we had good air-conditioning, and even a faint Wi-Fi connection. We hit the sack at 8 pm.

Back to the garage at 8 a.m. We supervised and he was done at 10 a.m., so and we hit the road again, with our fingers crossed. The mechanic gave us a better route to take home, and he fixed Seila’s broken air-conditioner as well. We were very grateful to find an honest and competent mechanic. Got back to PP in record time, fetched the last bag at the airport, and was able to attend Dove’s English School and Leadership graduation ceremony. Home at 7 p.m. All in a days work. 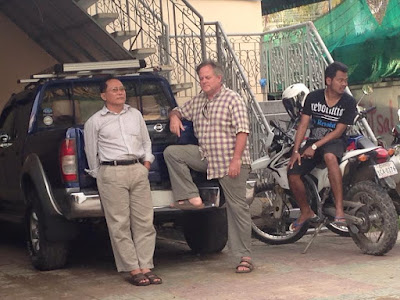 Meanwhile Back in Phnom While We Were Gone……

While we were gone, Bophal led Phnom ONYX program, which tied up the ‘Missional Church’ Block and introduced the ‘Khmer Church History’ Block. She took them to Toul Sleng Genocide Museum. None of the students has been to the High School turned Torture Center where 20,000 Cambodians were tortured and murdered, nor were they aware it even existed. They were appalled and one male student was extremely angry that such a thing was done to his countrymen.

After the tour, Bophal took them back to our house to debrief, and then showed them a video clip about how Pastor Christopher Lapel (Cambodian pastor from LA), had led comrade Duch, the Murder of Toul Sleng to Christ. The video followed Duch’s giving himself up, his trial at the International Tribunal, his confession of Christ at the trial and taking responsibility for his actions, and his subsequent imprisonment and life in prison. It was a very powerful time for the ONYX students. They were moved and Bophal couldn’t have been a better one to handle that session. 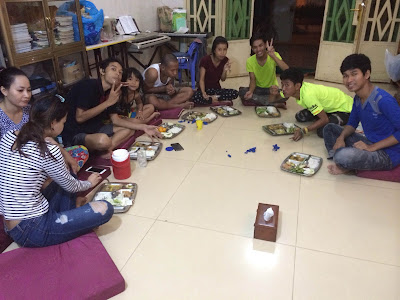 Over the last year, most of the 16 Center of Peace college-aged students left COP to go out on their own. Some left with typical resentments, chaffing at a lack of freedom to do their own thing at their age, but most return every Sunday for services at COP. During Sunday worship time, Bophal showed a video about the commitment of a Thai female High School teacher to keep her charges from shipwrecking their lives, and the cost she paid to do it. It was a very well done video, and Bophal very deftly facilitated a discussion about the various story lines in the video among COP people from ages of 5-24. During the discussion, teens talked about what bothered them, some confessed, they forgave each other and there was reconciliation, and some thanked Bophal for her efforts to nurture them and keep them from straying off the straight and narrow. 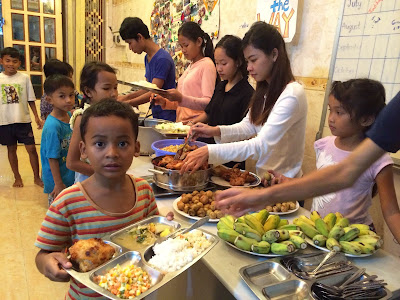 There are times when I wonder why I am here doing what I do, and there are other times when there is immense joy and satisfaction.


Peace for the journey,