"Adventure Retreat," a phrase that could mean so many different things to so many different people. For me it meant a sore back from sleeping on the hard ground, or bamboo slats, using a squatty potty, and no guarantee I would have hot water for the packets of instant coffee I brought along. All of that came true, by the way. Gone are the days of wanting to sleep on the mountain peaks in the depth of winter or anything similar. 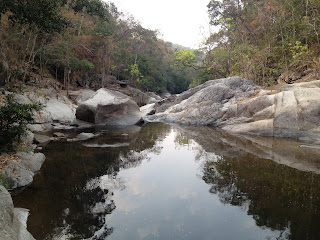 The ONXY Adventure Camp took place at a place called Yowk, 30 kilometers off a National Highway in the foothills of the Ural Mountains. Yowk is part of a national park system and we camped at the base of a series of seven water falls that stretched upward for about two kilometers. The swift coursing water ran clear, cold and clean. It was impressive. Vysal did a good job in selecting the site, which is a popular picnic spot on holidays. No one ever proposed the idea of camping in tents there, and we were the first. Some of us slept in tents, others on the wooden raised platforms for picnicking. A few students were disappointed because they didn’t get to sleep in a tent as that would be a first, and badge of honor for them.

To my delight, there was no cell phone service available. The 50 or students from DOVE’s 4 Leadership Training satellites, along with retreat leaders could only use their phones to take photos and for flashlight use. 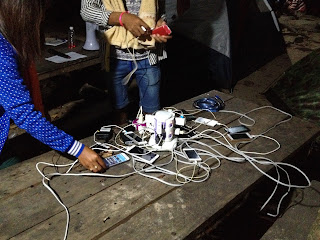 We arrived at noon, and after a brief rest and orientation to surviving in the wilderness, DOVE coordinators led team building games, some of which were rather challenging and involved being tied together, and carrying a member of their team up the mountain trail and back in competition with the other satellites. The rest of the afternoon was spent climbing up the lower section of the falls, swimming in the frigid pools, basking in the sun on large smooth rocks, and taking many photos. All were continually impressed with the beauty of the descending river and the falls.


At the campfire that evening Seila told the story of Seang Ang, a Cambodian pastor/Evangelist who risked his life during the Vietnam War and with the underground church to share the gospel post Khmer Rouge. Seila emphasized that real leadership is more about scars than stars, and that this generation of youth have yet to be tested like their forefathers.

Next morning students from each satellite went on a separate Emmaus Walk, and then shared their own personal life stories with the members of their group until lunch. Many broke down as they shared about their emotional pain. In our last 3 ONYX cohorts, rarely have we found a student  who had not been touched by some sort of emotional trauma, mostly family related.

That afternoon, all the students climbed all the way up to the 7th level of the falls- the very top. They had to cross the strong coursing waters a number times, negotiate slippery rocks, scale massive boulders and steep inclines. None had done this before, and the women were touched and impressed that the men tested slippery rocks and the depth of the water before helping them across, as well as helping pull them up the steep, slippery algae-covered rocks. That morning, only a few feet from our campsite, I slipped on wet rock at the edge of a gentle pool and banged up my arm and leg pretty good –thanks to my over-sized and soaked Birkenstocks. Seila forbid me to go to the top for fear of a repeat performance on a slippery precipice. 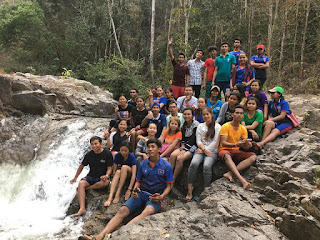 At the last minute, a number of students called saying they were too busy to come, so we had about 75% of the ONYX students in attendance (about 50 students). This was discouraging but we working with what we had was a blast. That night at the campfire, many testified that they too, wanted to cancel as everything else seemed more appealing than living through adventure retreat and leaving their comfort zone, but they were overwhelmed by their experience over the weekend, and testified that they really made the right decision, that being pushed out of their comfort zone produced all kinds of fruit they didn’t expect. The provincial women felt awkward being around so many people they didn’t know, but were so glad to make new friends through the ice-breakers and team building exercises. These normally shy provincial girls were transformed into comedians as soon a microphone hit their hand, and told us how they had tried everything to convince themselves they shouldn’t come. The ONXY students chirped with laughter as they enjoyed listening to their own peers. 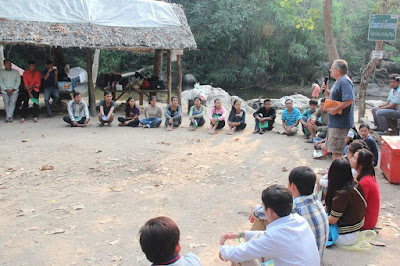 The following morning, I gave a short devotion about the Celtic Tradition of “Thin Places,” where life crises and nature come together causing the membrane between earth and the spiritual realm to become very thin (speaking in metaphorical language). Moses, Elijah, and Jacob and others in the Bible were able experience the presence of God at thin places. I sent them out by twos to find a secluded and beautiful spot, maybe a thin place, and settle in for 30 minutes. They were to say only one short prayer to invite God to be present with them. I asked them not pray anymore, not to think, but to listen, smell, feel, taste, and observe all aspects of nature around them. Today you are going to read the first Bible, the illustrated one – God’s creation. They came back for debriefing and some had written poems, some had sketched pictures, and others heard from God in different ways and were deeply touched. We continued to listen to students share their personal stories in a very candid and transparent ways, assuring them that what shared stayed in the group. 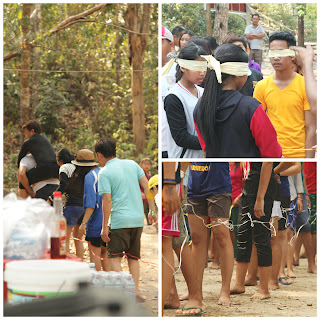 I, myself was not looking forward to this retreat for another reason, and that was that I had bonded very closely to last year’s cohort and felt I could not drum up the emotional energy to disengage with them and begin the process with a new group. The retreat broke down all such barriers for me, and for others who had different barriers. Before I went, I said; “God, I am not expecting much, only to get through this and back to the comfort of good coffee, a soft bed, a fan, and a sit down toilet as soon as I can. But I really hope you surprise me.” And He did.


Peace from Brian, post-Adventure Camp in Cambodia.
Posted by Brian M. Maher at 8:33 PM No comments: