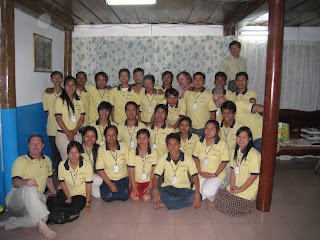 Today is a rather sad day as one of my former staff, Mr. Phearun, 28 years old, was hit and killed by a drunk driver while driving his motorcycle. The drunk who hit him spent the night in the jail but will probably be released soon or is released already because the family has money. I knew Phearun since 1998, and had hired his older sister to work for the EFC KEY. He was a young man full of energy and service for the Lord. He will be missed by man.

This morning we had a touching experience as group of Seattlites listened to former Pastor Amos speak about his call to Human Rights and social justice work. I also knew Amos from the time he was a very young boy in 1990. His father was a church leader during the time of the underground church during the late 70’s and the 80’s up until freedom of Religion 1990. Amos grew up in the Olympic Church which was very active during 70’s before Pol Pot took over. Amos was a student of mine in the Diamond Program Level 2 in 2008, and really felt the call of God on his life to help communities in conflict from one of our DP blocks taught by Indian Raju Bagwat on Social Justice and Community Organizing. At the time Amos studied with us, he and his fiancé were working at FEBC radio station. One of our themes in DP was; “Don’t read the Bible in one hand unless you are reading a newspaper in the other.” As Moses continued to broadcast about the love God on the radio, he began to become acutely aware of all the land evictions happening in Phnom Penh and all over the country. He began to wonder what good it was to broadcast the love of God and go to church and sing lovely praise songs while doing nothing to relieve the suffering of those being evicted, cheated by the government and beaten violently by the police. His Christian peers and pastors kept telling him that getting involved in politics is not the job of the church but Amos did not see it as political. He could not see how any Christians, western or Cambodian could separate love from justice. The love Christ demands a sacrificial, risking love that ends up delivering people from bondage and darkness. Amos got tired of offering Christian platitudes over the air and went to work for a human rights organization. He has slept on eviction sites, advocated for evictees, provided them with legal counsel and disseminates information about the abuses of the government on the poor. Amos is a prophet and is a target of the government and a thorn in the side of the church as he continually reminds them of the hollow their preaching and worship is while they keep their hands clean of risks and helping the poor. Amos is a prophet, just like the Biblical prophet Moses, and is highly respected by the non-Christian Human Rights community as a Christian of love and action. He is criticized by many Cambodian churches as he confronts them for preferring the statusquo of worship, Bible study and basking in God’s blessings. Jesus, he says, has called us to yoke up with his suffering and to lay down our lives for the sake of our marginalized brothers. Amos is passionate about his calling, and pledges to fulfill his role as a prophet to call the church to repentance. He is willing die for his role as a prophet and for human rights activist. When I posted he quote; “To get to heaven, one needs a reference letter from the poor,” he was one of the only ones to really appreciate this quote. Other commentators began to split doctrinal hairs and missed the whole point entirely.

I could really relate to Amos because we really are kindred spirits. I am a bit jealous because I believe his prophetic voice is being heard while mine falls on deaf ears. Maybe I am just meant to be a prophet and voice for the poor to myself?????

Anyway, Amos was a great inspiration and challenge to our group of white, wealthy, and overly educated Christians from the Seattle. Not one the 14 of use were unmoved. Now the real test will be to put what we all felt was a shove from the Holy Spirit into practice. 45 Million Americans have no insurance, more that that are unemployed, 13 million children live in families under the poverty level, education for minorities and those is urban low rent areas is atrocious, the media pumps sexual gratification into all its marketing strategies, corporate managers get richer while blue collar jobs are made obsolete and are outsourced to developing countries. The government gives large tax cuts to the richest 5% of Americans whiling cutting programs for the poor, and our foreign policy and military are used to create ever expanding markets for global capitalism and the environmental degradation of developing countries that follows. We American and Global Christians have our work cut out for us but are we willing to be prophetic, challenging and willing to offer creative strategic initiatives, or will we be content to just be nice church people. The church is not only called to be the conscience of the government, but to model a better way to society. Let’s do our job.
Posted by Brian M. Maher at 3:16 AM